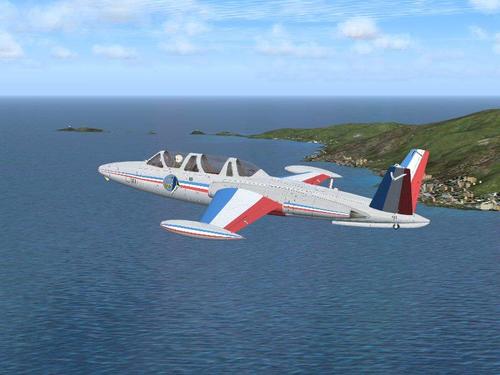 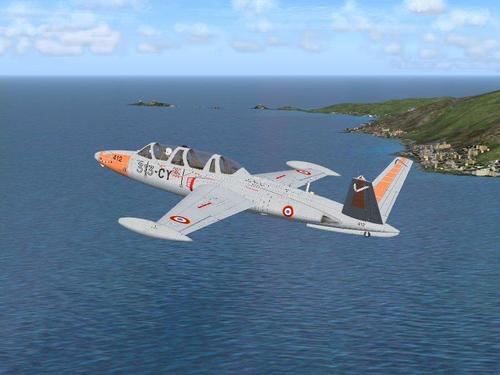 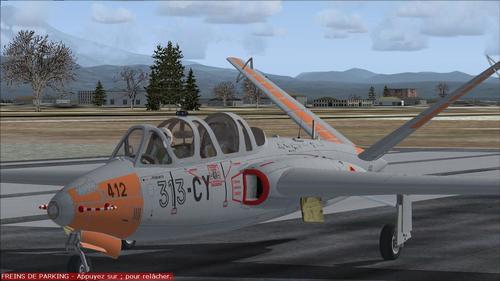 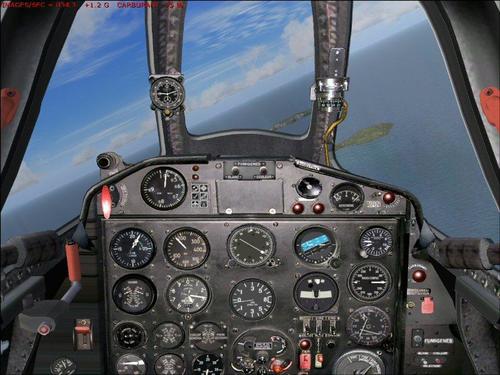 The Fouga Magister CM170 is presented in 3 versions:
- the "lower serials numbers" version (cfN°62)
- the "higher serial numbers" version (cfN°412) , with remarkable "whiskers" (VOR antennas). This variant include a "dual control" (DC) model which can be piloted from the rear seat.
- the "Patrouille de France" (PAF) version, in his 1966 paint scheme.

As a simplification, all models use MarboreVI engines, so they have same performances. In fact, the lower serial number aircrafts were equiped with less powerful engines (MarboreII ). Besides, several differences between the real airplane and models were intoduced to make its use easier for the virtual pilot :

- the nose gearwheel is steerable while the real Fouga was driven on ground whith toes brakes
- a GPS, a DME and an automatic pilot are introduced in the model
- several supplementary lights are placed on the panel to ease virtual flying (flaps, landing gear,
airbrakes)

The Fouga Magister CM170 is a two-place, twin-engines military jet aircraft trainer. It was developped from a cooperation between Mrs Robert Castello and Pierre Mauboussin, french ingeniors of Fouga company, for the airframe, and Mr Joseph Szydlowski, Turbomeca company's founder, for the jet engines.

The first flight has taken place on 1952 july 23 with Léon Bourrieau as test pilot. It was selected among 24 other aicrafts presented to the OTAN consultative group for the flight training. The production began in 1956 in France ( successively by Fouga company, then Air Fouga, and by Potez, which finally became a part ofAerospatiale) and also by several nations (Germany, Finland, Israel. . . . ). At the end of the sixties, around a thousand aircrafts were produced.

The french Airforce was the main user of the Fouga Magister between 1956 and 1996 with about 400 aircrafts and two millions of fhight hours. Thirty aircrafts of a naval version, called Fouga Zephyr CM175, were built for french Navy. Up to 12000 pilotes were trained with the Fouga Magister around the world. Several aerobatic teams have used the Fouga Magister, especially the french patrol "Patrouille de France" (PAF) between 1964 and 1980.