The North American XB-70 Valkyrie was a prototype supersonic bomber of the U.S. late 1950. It is designed by North American. Only two copies were built, one of which was destroyed in an accident.

The loss of a prototype sign the death warrant of the program. This flight is a flight advertising, many journalists are witnesses to the accident at this very expensive machine, it weighs 250 tons and had cost 10 times its weight in gold.

On 8 June 1966, the second prototype leaves Edwards AFB to perform measurements of sonic booms. In addition, this test allows General Electric, manufacturer of the engines XB-70, take photos of the airplane advertising with an F-4B Phantom II, F-104N Starfighter, F-5A Freedom Fighter and a T -38 Talon, all powered with engines from General Electric. But the F-104, issued in the wake turbulence generated by the XB-70, struck, destroying the left vertical stabilizer. After 16 seconds of flight, the bomber gets out of control, then crashed. 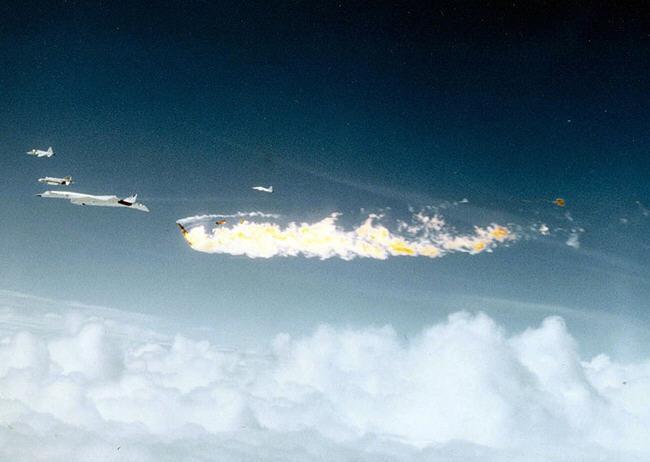 Al White, the XB-70 pilot, ejected in time but his copilot Carl Cross is unable to eject and was killed, along with the pilot of the F-104, Joseph Albert Walker. (Source Wikipedia)
Author Massimo Altieri, update by Bob Chicilo