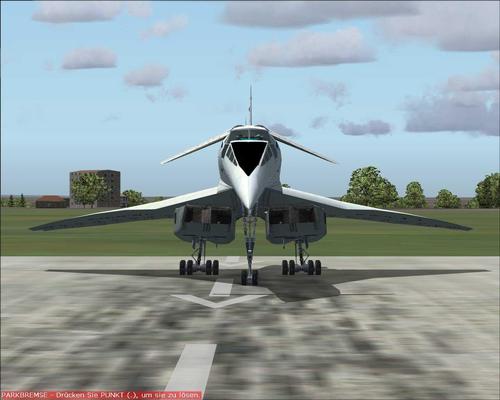 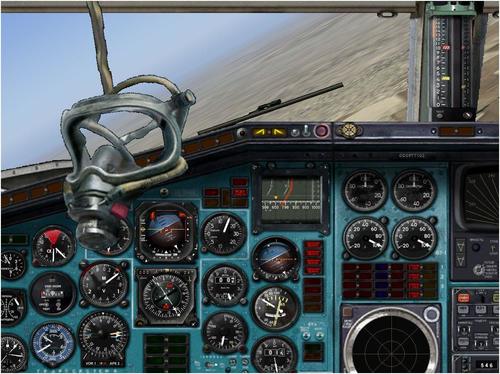 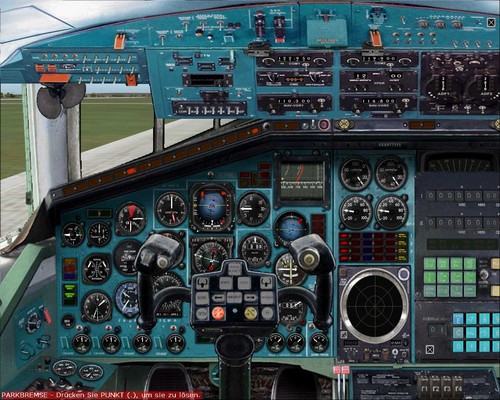 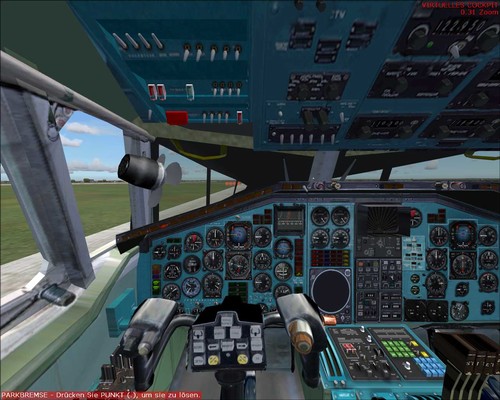 Here is the Soviet supersonic passenger aircraft. First flight in 1968, two months before the western Concorde. Also known as "Concordski" or "Charger".

This is one of the very few add-on for FS2004 where simulation is so pushed! We can only enjoy this level of quality, and all the control panels inlaid with tiny buttons that we must learn from reading the manual.

The Tupolev Tu-144 (NATO reporting name: "Charger'") was one of the world's two supersonic transport aircraft (SST) to enter civilian service, along with the Concorde, and was constructed under the direction of the Soviet Tupolev design bureau headed by Alexei Tupolev.
The Tu-144 was outwardly similar to the Aérospatiale / British Aircraft Corporation Concorde, under development at the same time, and there were frequent allegations that Soviet espionage played a key role, giving the Tu-144 the nickname "Konkordski" or "Concordski". The Tu-144 was Tupolev's only supersonic commercial airliner venture, as the company's other large supersonic aircraft were designed and built to military specifications. All these aircraft benefited from technical and scientific input from TsAGI, the Central Aerohydrodynamic Institute. McDonnell Douglas, Lockheed and Boeing were three other manufacturers who attempted to design SST airliners for the US market during the 1960s, but without success.

A prototype (OKB: izdeliye 044 - article 044 first flew on 31 December 1968 near Moscow, two months before the Concorde. The Tu-144 first broke the speed of sound on 5 June 1969, and on 15 July 1969 it became the first commercial transport to exceed Mach two. The Tu-144 was introduced into passenger service on 1 November 1977, almost two years after the Concorde, but was soon withdrawn after just 55 scheduled passenger flights due to potentially severe problems with aircraft safety and was not re-introduced to service.
Although the Tu-144 was technically broadly comparable to the Concorde, it lacked a passenger market within the Soviet Union and service was halted after only 102 scheduled flights (55 passenger flights, the rest cargo). The Concorde remained in service until 2003, being withdrawn three years after the crash of Air France Flight 4590 near Paris on 25 July 2000, the only loss of an SST in civilian service.

The Soviets published the concept of the Tu-144 in an article in the January 1962 issue of the magazine Technology of the Air Transport. The air ministry started development of the Tu-144 on 26 July 1963, following approval by the Council of Ministers 10 days earlier. The project started two years later than the Concorde. The plan called for five flying prototypes to be built in four years. The first aircraft was to be ready in 1966.
Despite the close similarity in appearance of the Tu-144 to the Anglo-French supersonic aircraft, there were significant differences in the control, navigation and engine systems. In areas such as range, aerodynamic sophistication, braking and engine control, the Tu-144 lagged behind the Concorde. While the Concorde utilized an electronic engine control package from Lucas, Tupolev was not permitted to purchase it for the Tu-144 as it could also be used on military aircraft. The Concorde's designers used the fuel of this airliner as the coolant for air conditioning the cabin and the hydraulic system (see Concorde#Heating issues for details). Tupolev installed additional equipment on the Tu-144 to accomplish this, increasing the weight of the airliner.

Tupolev continued to work to improve the Tu-144. Many substantial upgrades and changes were made on the Tu-144 prototype (serial number 68001). While both the Concorde and the Tu-144 prototype had ogival delta wings, the Tu-144's wing lacked the Concorde's conical camber. Production Tu-144s replaced this wing with a double-delta wing including conical camber, and they added an extra simple but practical device: two small retractable canard surfaces one on either side of the forward section on the aircraft to increase lift at low speed.

Moving the elevons downward in a delta-wing aircraft increases the lift, but that also pitches its nose downward. The canard cancels out this nose-downwards moment, thus reducing the landing speed of the production Tu-144s to 315–333 km/h (170-180 kn, 196-207 mph) - however, still faster than that of the Concorde. The NASA study lists final approach speed during performed Tu-144LL test flights as 170 to 181 knots (315 to 335 km/h), however these were approach speeds exercised during test flights specifically intended to study landing effects at maximum possible range of speeds, regardless of how hard and stable the landing can be. As to regular landings, FAA circular lists Tu-144S approach speed as 178 knots (330 km/h), as opposed to BAC/Aerospatiale Concord(e) approach speed of 162 knots (300 km/h), based obviously on the characteristics declared by the manufacturers to Western regulatory bodies. However it is open to an argument how stable was Tu-144S at the listed airspeed. In any event, when NASA subcontracted Tupolev bureau in the 1990s to convert one of the remaining Tu-144D to a Tu-144LL standard, the procedure set by Tupolev for landing defined the Tu-144LL "final approach speed... on the order of 360 km/hr depending on fuel weight." Brian Calvert, the Concorde's technical flight manager and its first commercial pilot executing several inaugural flights, cites final approach speed of a typical Concorde landing to be 155 to 160 knots, i.e. 287 to 296 km/h. Lower Concorde landing speed compared to Tu-144 is due to the Concorde's more refined design of the wing profile that provides higher lift at low speeds without degrading supersonic cruise performance — a feature often mentioned in Western publications on the Concorde and acknowledged by Tupolev designers as well. (Source Wikipedia)